NOLA update: as promised! Last week I visited New Orleans and drove out West of the city along the Old River Road, fabled home of a thousand plantations. While most of them are long gone, a few beautiful dames of the antebellum era still exist along the Mississippi's banks. Two of them, Oak Alley and St. James, sit side by side. While the house at Oak Alley is now a popular tourist destination and has been featured in several films, St. James is a quieter, austere mansion set on 1,000 acres of a working sugar cane farm.
Stunning Oak Alley. It is surrounded by 28 classic columns, each 8 feet in diameter. Famous for its beautiful views and eery evening landscape, the plantation and home have appeared in numerous movies, including Interview with a Vampire and (so weirdly) Beyonce's Deja Vu music video. 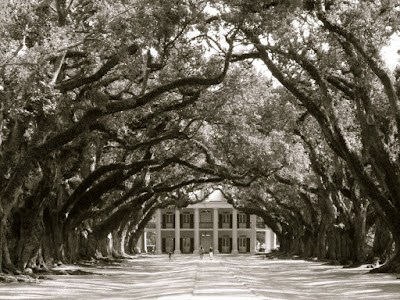 The magnificent trees are layered in leafy ferns. The trees are thought to be over 300 years old, planted in the early 1700s by a colonial settler. The house was not built until the 1830s. 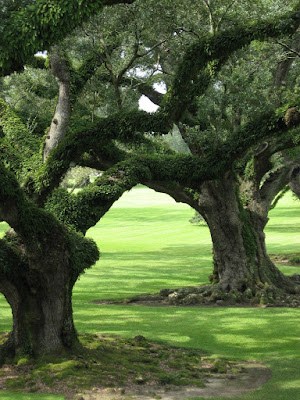 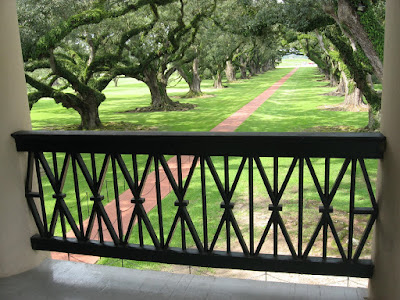 The St. James Plantation, next door. I had the honor of receiving a tour from one of the plantation owner's descendants. The same family has owned the plantation since 1875. 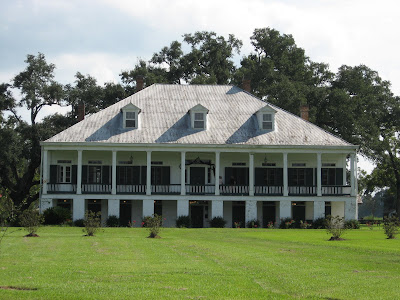 Every October, the St. James home is dressed for mourning. Mourning in 1800s Louisiana plantation country was a complicated cultural ritual that defined every aspect of the mourner's lives. In a world without internet or even reliable mail, the first step was to notify passersby that the tragedy had occurred. At the time, riverboats traveling on the Mississippi would have seen the signs of mourning, and carried the news along the shore. 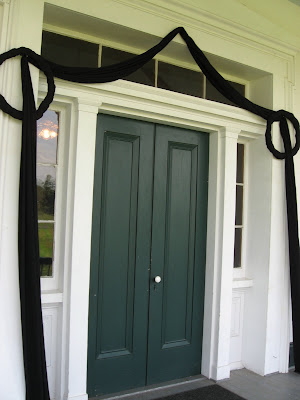 Mourning extended to every aspect of home life. In a world where early death and disease were tragically common, loss was still treated with reverence and care. The mourning period could extend from a few months to a year and a half, depending on the age and importance of the deceased, and the mourner's relationship to them. A widow mourned longest, and even her bed linens were trimmed in black ribbon (something to think about the next time you fall in love with a black and white bedset!). 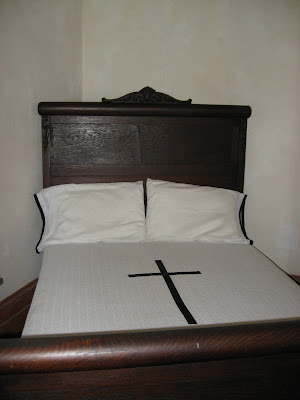 Creole mourning traditions had both French and Spanish roots. Here, a drape is hung over a mirror, to prevent the spirit of the deceased from becoming trapped inside. In Creole tradition, spirits were attracted to shiny objects, and so widows also refrained from wearing bright jewelry for the first few months after the death. The clock in the mantel is stopped at time of death, as was traditional. 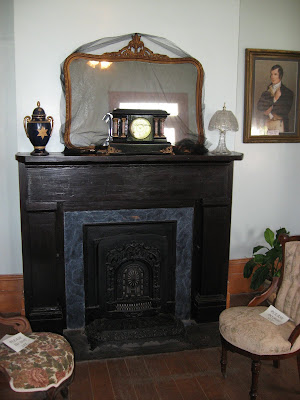 Most Creole families were Catholic. Here, a prayer bench and rosary are placed coffin side. In the warm Southern summers, a coffin would be kept before burial for three days or less, often with bowls of ice beneath. The piece of furniture under black cover is the piano. After a death, pianos were covered because music was joyful - and thus inappropriate. Notice that even the candles have little black ribbons on them. 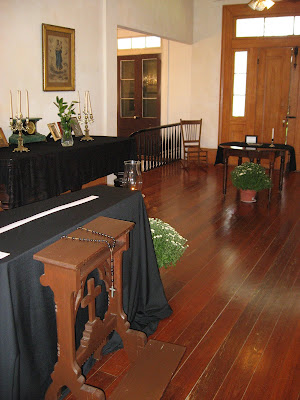 Widow's weeds. These elaborate laces would not have been worn until later in the mourning period, as would the shiny brooch. With the death rates in those days and the extreme measures for mourning, women who lived past 40 would spend almost all of their remaining lives dressed in black. 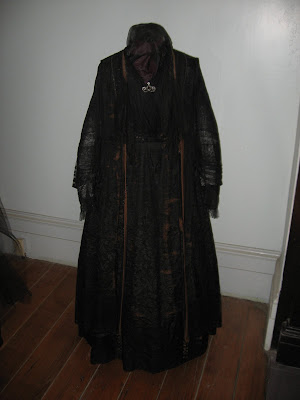 All images, my own. Please request permission to use.
Posted by Sanity Fair at 11:36 PM

Now you have thoroughly creeped me out -- I was looking at a black-and-white bed set! :-) But it's black with white polka dots. And the quilt has splashes of purple among the black and white flowers.

A fascinating look at ritual. I am perhaps unnaturally attracted to Catholic ritual, imagery and symbols. With Pigtown posting on Poe's funeral in Baltimore this weekend-you two could be linked. Thank you for the glimpses-and widow's weeds- well another fascination of mine-I will send you and photograph from my collection- I have several women in ww-but one is my absolute best. GT

what a cool post! i recognized the first plantation from "interview with the vampire." we love to visit historic homes, and now i feel compelled to visit NOLA soon! thanks.

we're actually planning a trip now! thanks for your inspiration!

Little Augury - thanks for the pics!

This is fascinating - and what will you do for Halloween?! It seems I have a thing for Southern blogs!