Project Runway this season hasn't had much "run" in it. In fact, the entire season has been stuck in neutral - neutral colors, neutral designs, neutral characters. Where are the epic screaming matches and hair pulling? The accusations of plagiarism? The whisperings about cheating? Every episode has felt like the TV audience was taken on a trip to Baskin' Robbins with its dozens of ice cream choices - and forced to order vanilla. So it was really a surprise in the final challenge to see this dress below. It is, in a word, FANTASTIC. Michael Kors said it was the best piece of the season, and he's (of course. duh.) right. And it guaranteed designer Emilio a slot at the coveted Bryant Park show. Sadly, the pics don't do it justice. If you get a chance, catch the full episode (and gown close-up) here. 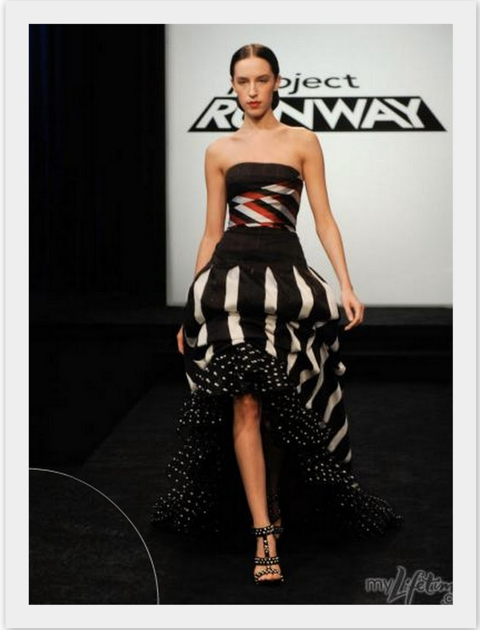 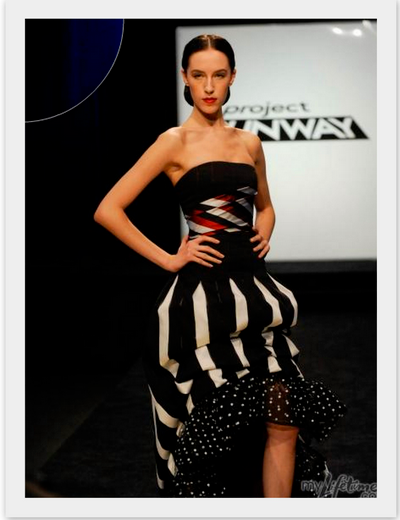 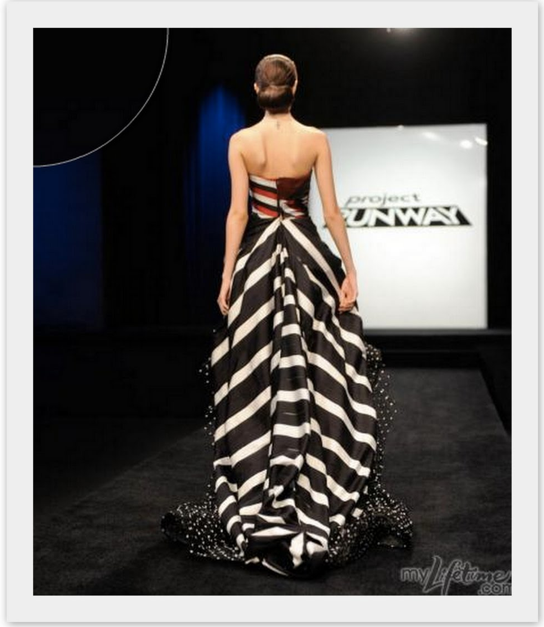 P.S. For some reason, this reminds me of a look Lynn Wyatt might wear. They like stripes big in Texas!
Images, lifetime.com
Posted by Sanity Fair at 8:43 PM

I know I am the only person to not have watched this show (and maybe mymother-law)but willlook for it next season. The dress is quite remarkable, expecially the rear of it. Fun for sharing.

Agreed! This season has been marginally less boring than the last one. I don't think Lifetime has what it takes to keep up the momentum that Bravo had (and having the last season in LA didn't help either). But this dress is fabulous and I could see it on the Golden Globes carpet (maybe without the polka dotted tulle tho'...). Oh, and Anthony cracks me up, sorry to see him go...

I' so in agreement, ion fact when they show the wall with Runway on it from the back it says yawnur
How ironic is that???
The dress was fabulous & bout damn time!!!

Alicia - LOL! I have NEVER thought to notice that about the reverse lettering of "runway" - but you may be on to something there :)
And agree with Robin that L.A. didn't help. Sorry L.A. This is a New York moment.

this dress is amazing, the back alone is fantastic. Maybe we are getting a little jaded and expect constant over the top entertainment. I have not been that impressed with most of this years contestants but I doooo love this dress.

I have enjoyed watching-by far this guy is the superior designer. I didnt like the polkadot fabric on the dress but otherwise fairly amazing. That Anthony is a hoot-very of the Atlanta Sugarbaker set-he needs his own show. pgt

What a gorgeous gown!

love your sense for beauty, thanks for your comment on my blog..

agneta, the swedish one ;)

I do agree. I think the reason for it is a simple fact, that any great idea, repeated over and over and OVER again at the end always looses its appeal: it becomes avarage and uninteresting.More so, when the present talent is questionable.

That is a wonderful dress. It's modern with a vintage flair at the same time. Bravo!

I admittedly have missed most of the shows but love this dress. The back is just fabulous.

I love that dress!! And am in agreement that this season is weak - both the designers creations, AND their personalities, IMHO!

i think this dress looks quite nice!

i think this season has been quite boring, so i stopped following it :S