China, silver, and the like are much collected and prized in the South, and being from a family that was Southern before it was American (you know, when that whole revolution thing happened) we have been collecting this stuff for a looooooong time. I've never purchased a single plate of china, but I possessed five full sets of it before I had a degree. And being both a historian and a sentimental fool (highly complimentary traits) I'll be darned if I'm going to part with a single bread plate or teaspoon. The question of course, is what to do with all of it. So I was intrigued by the winter issue of online magazine Nesting Newbies, which ran a brief article on mixing vintage pieces in with modern designs for a table setting that doesn't take you straight back to Twelve Oaks. 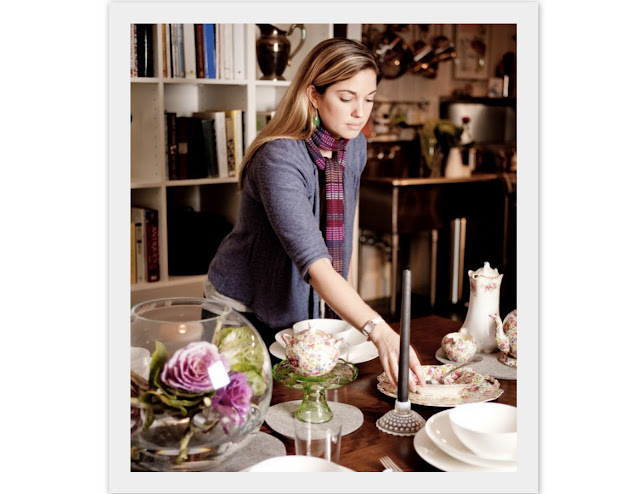 There are two good ideas I took away from this story, the first, obvious tip being to mix old and new. But another way to freshen things up is to mix patterns - both ideas are happening in this picture, as interior designer Jennifer Rowland Clapp puts finishing touches to her table. 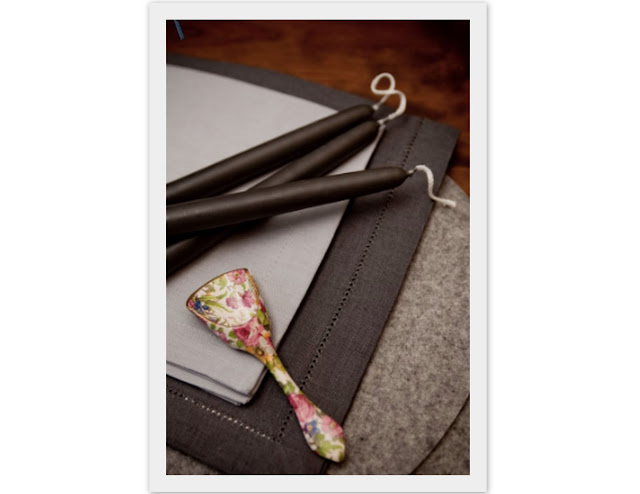 Another great idea Clapp incorporates is using linens sparingly - an absence of fine threads makes the setting more casual. The touches of fabric she does use bring her floral chintzes down-to-earth with more serious, subdued colors. I particularly like the mix above with a slate grey bordering on brown. 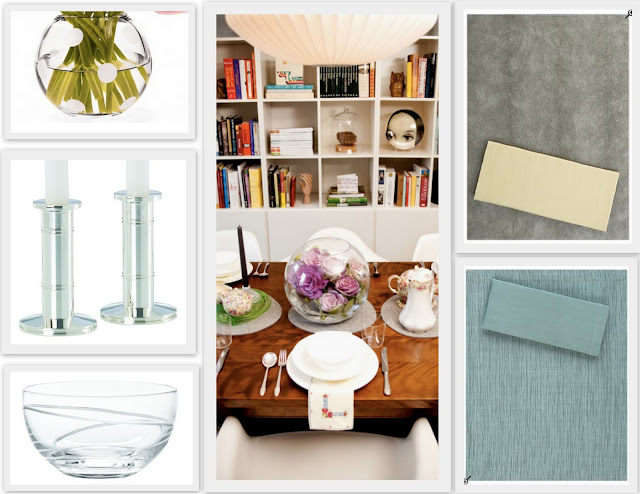 Another shot of her simple-does-it table. Lining up food, condiments, and decoration on felt rounds in the center replaces the traditional table runner and keeps things from becoming too formal. Kate Spade offers some chic, modern pieces that would mix well with vintage items (left hand) and old standby Crate and Barrel has a variety of linens in sooty shades (right hand). If you want to more closely imitate Clapp's style, just pull the felt rounds out from between your stored china and line them up on the table. Modern AND free! 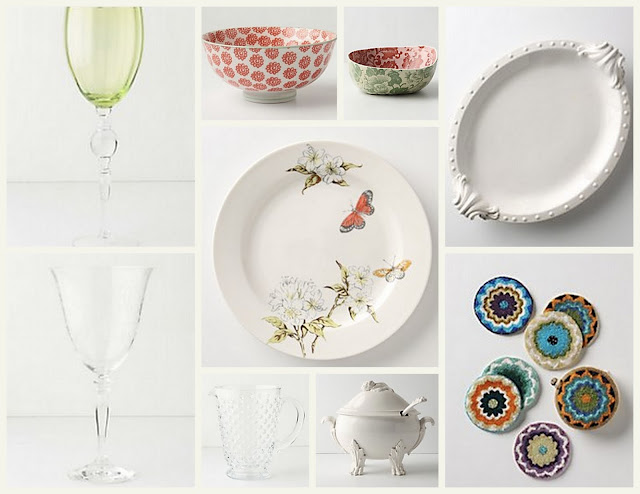 Finally, if you have a lot of modern pieces, and would like to try this in reverse by adding in some vintage feel, hit up Etsy, your local flea market, or just saunter over to the queen of new-old stuff: Anthropologie (all items above).
All images, companies and magazine as attributed above.
Posted by Sanity Fair at 4:42 PM

I love this post encouraging the mix of old & new. When I went home for my moms memorial, my dad was itching at the bit to part with his mothers, my mothers and her mothers fine china & sterling. When I mean 'part' I mean Goodwill. I about had a stroke. For him I know he will no longer use such things & likely hold memories that now make him sad. Nothing is more charming than mixing those vintage, well=loved treasure with today's great pieces. Thanks for great inspiration.

Yes to the mix! I use my china much moreso since I've embraced combining patterns and mixing styles. I can go from formal to fun in an instant and it keeps everything from getting too stressful! China should be about using special things with special people -- not merely special occasions. Once I embraced that, it took the pressure off...

What a fun post! Matt and I bought a vintage set of gorgeous Italian china at an auction for our wedding china. It's by Richard Ginori, called Palermo Yellow - so classic and timeless. Since we bought vintage we have had to supplement with older and newer pieces. It's fun to have such an interesting collection! :) Smiles!!!

FIVE full sets?!?! GOODNESS, Skyla! My mom I think was so scarred by her mother/grandmother insisting she register for THEIR china patterns (to get even more of it!!!) that she insisted we pick out our own and start fresh. And so, I just have the one set...

Though I'm happy to relieve my mom of her gorgeous antique gold rimmed pattern whenever she gets tired of it. :)

When I married you had to have entire sets of everything, and it all had to match. I love the mixing and matching done today. It is so much more interesting and fun to set a table now.

I'm looking to rid the old Mikasa Versailles pattern. It was made for decades but we have one of the older sets. We have an ivory set that lost pieces in a move that I like to use old Limoges with. What I would like is a nice set of white to go with some of the mixed salad size plates we have collected or should I say mixed as in due to broken.

I never thought of using plate spacers on the table...

fabulous tips! old with the new is always a perfect mix...just one pattern is so blah...now, I'm off to check ur post on those laptop cases again, ready to shop for that!:)

Nice inspiration to mix it up. (For she who owns only one set of dishes.)

Oh my, Skyla, you could not have had better timing with this post!

My friend is getting married, and with such an occasion, comes her China, that of her family's and soon-to-be husband's. She told me last week that she is overwhelmed. (with all of that and the furniture coming her way!) I am sending this link to her, as I know this will help her out... thank you, thank you! Love this post.

wow. i love this post. wish you lived close to me and we could go over some things. have a great weekend doll. xo

My poor Father lugged around a service for 12 of French Haviland that I was presented with on my 2nd birthday! I was grown before it ever left the china barrels! I plan to be buried with it!

Love it! Do you know who makes that butterfly plate? i

I love this post! being from the south I am obsessed with china and silver and am horrified at the casual or waaaay to modern ways in CA!