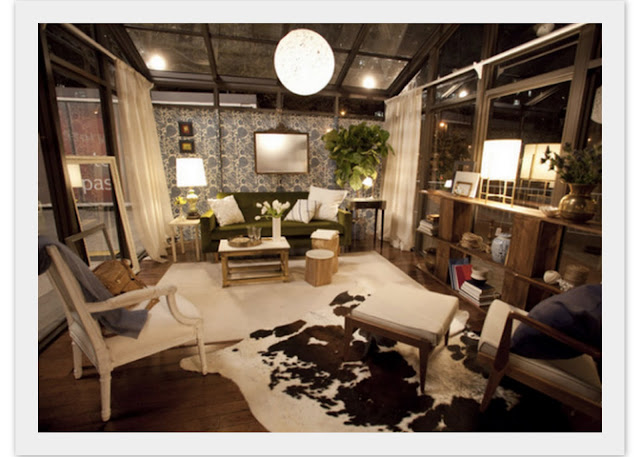 Finalist Emily's room design from a previous episode.
Did you catch tonight's season finale of Design Star?! It's like the WWE of the design world. Except, you know, the sparkle is on wallpaper instead of biceps. For what was shaping up as a lousy season (WAY too many team projects with a lot of people who spelled "team" with an "i"), actually had a pretty exciting ending. Here's the recap:
Alert! Major spoilers ahead!
CLIENT CHOICES. Finalists Emily and Michael each had to choose a former competitor as their "dream" client.
Michael: Chose Nina. WHO WANTS TO WORK WITH NINA AS A CLIENT? This was an insane move. Mostly because she's tried and true - as a horrible client. Remember the first episode when the designers had to design spaces for each other? She completely threw her partner under the bus. True, the room Courtland designed for her wasn't great, but the rest of the designers just settled for pushing their rivals into the street. She dragged him right out to the center line, tied him up, and waited for a big red double decker. Not to mention, she's just really annoying to listen to. Fail.

Emily: Chose Tom, and went for a new look with urban sleek based on his suit. Her vintage mix is a style we all love, but the judges have definitely seen it before. Win.

THE SHOW CONCEPTS FOR HGTV
Michael's show proposal: Younglings in transition (grad students, first job, etc.) and helping them make sense of their first space. A nice twist on the "My First Place" real estate show that HGTV already has - and a welcome change, I think, from a ream of shows that focus on cheap without including style. Win.

Emily's show proposal: Style to lifestyle (outfits as room decor). Can we all say it together please: "Domino's Outfit Into a Room series!!!!" It's an idea that's shown up on and off in magazines, but not in TV shows. It's taking a popular concept, and putting it in a new format in a really successful way. But is it too stylish for HGTV? Win. 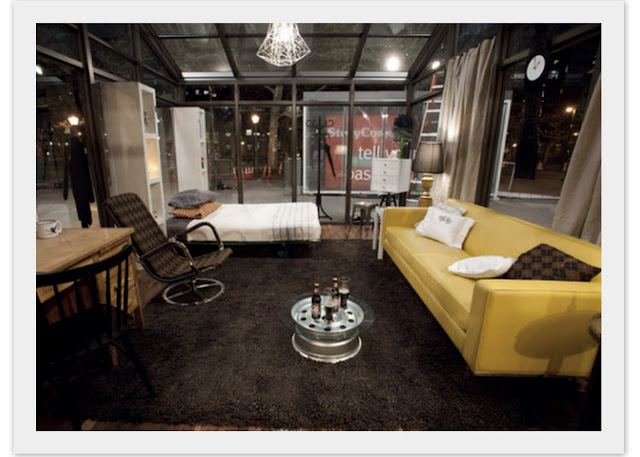 Finalist Michael's room design in a previous episode.
SKEEZ FACTOR
What was up with Michael coaching Nina on her reaction to the room? NG, flyboy. It should have been genuine genuine. As in, not faked for the judges. Fail.

UNEXPECTED SURPRISES
Candice Olsen's PLEATED GREY SPLIT SKIRT OUTFIT. Holy knife pleats Batman! What WAS that? Candice is by far one of the best designers on HGTV, which requires having well developed taste in everything - except clothes. Oh well. She made up for it with moxy (and if anyone picks on her, I'll bet Chico will take 'em down). So a draw. Um, is that a Win/Fail? A Wail?

Nina did not kill Michael and bury him in the reno skiff. Who knew? Like a blender, the collaboration with Nina started out rocky and very loud, but by the end, her attitude was smooth puree. Was her inspiration good for the space though? Another Wail.

HOSTING
Michael: killed it. His intro was spot on. I WANTED to watch his show, and his analysis of the space and how he could use materials was very creative. BONUS: acknowledging (and participating in) the "borrowing" of items from the parents. What young design aficionado hasn't done that? Win.

Emily: engaging, great ideas, and a clear story from the outfit to the room. Downside: too much step-by-step. Ironically, the judges have been harassing her about not "showing" how she does her work all season - so this is the result. Darn judges! Over all, still a great job - and several of her ideas were really inspired. Win. 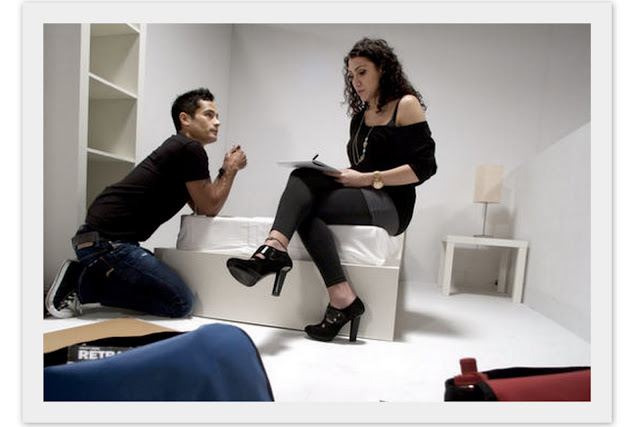 Courtland begs for mercy while Nina prepares for the kill. Toot, Toot! Is that a bus coming?
THE ROOMS
Michael: Great use of varied materials for an ultimately cohesive look. It was a really livable space, despite being incredibly tiny. But what was up with that red wall? I'm looking at you, Nina. Yet, a Win.

Emily: Sleek and chic! She broke out of her feminine box and created a fabulous suite with marvelous details (suiting pinstripes on the wall, a very sophisticated lacquered bar area). Win.

SO... WHO WON?
Emily! And we here at Sanity Fair (me) are thrilled - GREAT choice, HGTV. She really stood out from the pack as a designer. We can't WAIT to see the results - and luckily, we don't have to!!! Unlike past years where HGTV has delayed winner's shows, Emily's first new show will be out on August 29th. AND, it's doing the Hollywood home of one of Glee's co-creators!!! Style AND cultural relevance on HGTV? Now THAT is a show I will be here to see.

MISSED IT?
You can watch the entire finale episode HERE.

FINAL NOTES
The next series on HGTV is The All American Handyman competition, to find an efficient, honest, creative, talented, handsome handyman. So - Fail. The reality factor is right up there with Lord of the Rings. Next they'll be trying to find honest CONTRACTORS. Or unicorns.

Email ThisBlogThis!Share to TwitterShare to FacebookShare to Pinterest
Labels: TV/Movies

Such a tease!! I will watch it and find out.... there may be a surprise!

actually, the clothes to room idea has been done as a show---Dress My Nest on the Style network hosted by designer Thom Filicia. His budgets, though not disclosed, seem significantly higher than the average HGTV show. It will be interesting to see how this concept plays out with HGTV's limited budgets and time constraints.

Thanks for the recap. I totally forgot to watch.