Thank you bloggy friends for all the great words of support and advice on what became The Couch Hunt From H-E-Double Hockey Sticks. I'm long delinquent in responding. Why? Because I have spent all of my waking hours on the Couch Hunt. And they have to be waking hours, because I do not have a couch on which to comfortably repose. 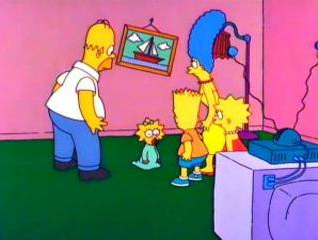 To summarize where we last left off, a couch I had ordered did not fit (or would not be fit, sans eager movers) into my home. Z Gallerie, purveyors of said couch, informed me of four things:
1) I could choose an exchange on their website.
2) I could have a full refund.
3) I could have a newer model of the couch that included removable feet, if I were willing to wait 8 weeks.
4) I could take the time I needed to make up my mind.
I considered an exchange for this lovely green couch - alas, also too large (or not!
Who knows if the dimensions are right!) 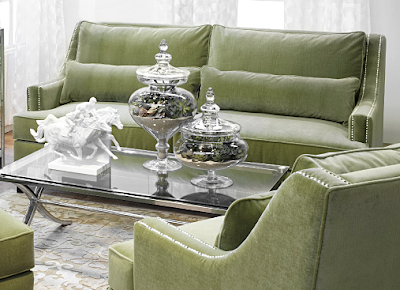 Funnily, not ONE of those things turned out to be true! The day after Mission: Couch Delivery failed, I left on a trip. During the time I was gone, I spoke with Z Gallerie several times, looked at various other couch options with them via phone, and was told to wait until I got back from my trip to make such a "big decision."
As it turned out, I didn't have that much of a big decision to make - Z Gallerie had made it for me. I decided I probably wanted a refund, and when I called the consultant I was working with to discuss it, she put me on hold. And came back with new information.
You know when your blood rushes really fast? And it sounds really loud in your ears? And you hear people say things to you like: You will not be getting a refund. You will not be getting an exchange. The couch is not available, new or old, with removable feet. And if you "refuse" the couch, it will be returned for a 50% restocking fee + delivery. Or, we can just send it to your building and leave it in the lobby for you to decide what to do with.
You know that feeling? When I could speak again, I requested to direct that speech toward a supervisor, with whom I then began the Viscous Cycle of Admitting Denial Conversation. Yes, all of those things I was told were not true. But the other things I was just told were true. Yes, they took full responsibility for them. No, they would not take any ACTUAL responsibility for them. I was finally offered a 30% restocking fee + delivery fee...
Alas, company culpability. In vain I pleaded my case - that the measurements they gave me for the couch were wrong and that this record-setting dispersal of misinformation included the other previously mentioned falsehoods. Nothing swayed them, not even the startling news that the couch - my couch - the couch that I apparently owned in a very irrevocable way - was now in parts unknown.
WHAT?!?!? 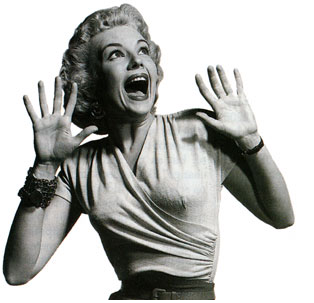 Apparently, if you leave a couch sitting around a delivery company's warehouse for a week, they get really bored, and decide to send it back where it came from, and they don't necessarily feel the need to divulge that whim to, say, the person who owns the couch, or (and this is a crazy idea), the company who manufactured it. It was gone. 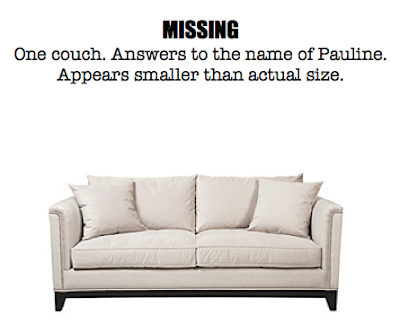 Email ThisBlogThis!Share to TwitterShare to FacebookShare to Pinterest
Labels: DIY

wow, what a saga, I'm glad you got your refund. For your search you should check out Macy's in Ballston. They have apt. sizes and if you catch them during a sale and have a coupon you can get a fantastic deal. Also there is a place in crystal city (in the strip outside of the big mall) that sells furniture with removable legs. Best of luck to you!

How eloquently you handled this conversation. This happened at my work place and what a nightmare. Our company would not be paid until we supplied an item meeting the measurements posted several times on the manufacturer's website. It was a mess.

For the company to not accept responsibility for their errors seems to be more common. Smaller local stores charge more but in the end I think are more willing to resolve the issue.

I too remain "new" couch-less in the quest for what I want versus needed height and what fits in the door!

Wow, what a pain. I won't be ordering from them. I have recently been on a couch quest as well and just decided to have something old and awful reupholstered. The dimensions are right (27 in high) and it will only be $1400 with fabric. Try a thrift store and a good upholsterer,maybe.

WHAT!!?? Exactly how frustrating, just so glad it worked out. What the customer has to go through though not right!

Come and enter my fashionable giveaway from The French Basketeer!

Thats fucked up. nothing worse than arguing with people who have your couch adn your money!

Always buy everything with your amex. Ive contested things and gotten the money back many times!

Yike! What a pain.

you're funny. good for you, girl, for not accepting their bad business practice.

Hi! I too bought the pauline sofa from a local furn. chain store called Living Spaces in cali. They offer the exact same sofa, same brand and custom colors at no addtnl cost for $795. And the lead times is only 2 weeks. Try going to http://jonathanlouis.net/ and searching for a dealer near you. You should be able to find a store that can order this for you, in the color you want with removable legs and not have to wait 3 months. good luck to you!