It's a stunningly beautiful day in Alabama. Earlier this morning, I snapped this pic on my new blackberry of a lovely configuration of mare's tails. They look a bit like jellyfish trailing tenticles to me though... maybe I'm overdue for a trip to the beach? 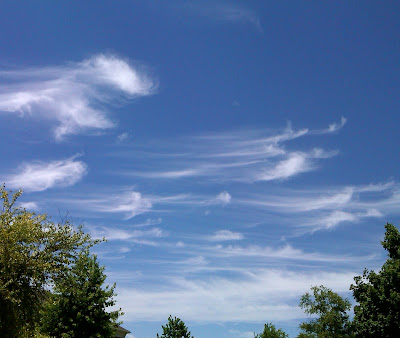 I'm very fond of using elements from nature in decorating, and far from finding it cheesy, I love a trompe l'oeil ceiling with clouds. If well done (think: opposite of Vegas), a cloudy ceiling brings a little of the outdoors, in.
The art of trompe l'oeil dates back to Greek times, and figures among the Greek mythology:  "A legendary contest is remembered between two ancient Greek painters, Zeuxis and Parrhasius. They challenged each other to produce the most realistic painting. Zeuxis painted grapes which the birds flew down to try and eat. Then, Zeuxis asked Parrhasius to draw back the curtains on his painting. Parrhasius knew he had won because the drapes were part of the painting." - Rebecca Abel, Brown University. By far the most beautiful examples of this art are found in the churches of Rome. This exquisitely rendered ceiling of Sant Ignazio was painted by Andrea Pozzo around 1685. The ceiling is completely flat, including the dome. The effect in real life is indescribable - the figures above seem to bend toward you, and their expressions alter in the light. St. Peter's Basilica and the Sistine Chapel are of course the most well known ceilings, but glorious examples are found throughout the Vatican. In this hallway, an unadorned ceiling appears to be intricately plastered and carved.

This tradition later made its way to America, quite literally in the case of the library at Biltmore, which was imported from an Italian Villa in strips and then reinstalled on the ceiling. Constantino Brumidi brought the ceiling mural to government; below, the interior of the U.S. Capitol dome, depicting the Apotheosis of Washington (surrounded here by some picturesque clouds and the original 13 colonies, represented as maidens). The square pattern around the mural is not trompe l'oeil (literally: "fool the eye"), but impressed steel, painted to compliment the mural. It too has an Italian model:  the Pantheon.

Trompe l'oeil is still alive and well today. Here's chalk artist Julian Beever's highly amusing street work - the sidewalk is still there, but notice how the pedestrians are skirting it anyway.

And if you're feeling VERY daring and want to pick up a brush yourself, try The Art of Faux: 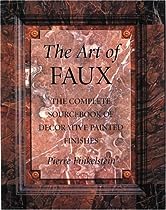 This si such a great post! I learned so much. ANd seriously, what kind of blackberry do you have? That shot is great!!!

are you a libra, darling? we air signs love to watch clouds. what a fabulous post!

i will have the pleasure of working with Pierre in a few weeks! (Pierre Finkelstein, author of The Art of Faux) This is a great post!

G - it's a blackberry STORM. I love it! I wanted an iphone, but reception is too iffy when I travel. But I can't complain - my little bb has been great.

Thanks Kitty! I had so much fun with this one - it seriously started this morning with snapping a picture. I got to thinking about an extended visit to Rome a few years ago... and ta da. Now I want to go back to Rome!

Theresa - what a coincidence! I just checked out your blog and love it - I hope you'll post on your work with Finkelstein!

Great post -- and great snapshot! I agree with you that tromp o'leil can be a lot of fun, and often very beautiful. But when it's wrong, it's REALLY wrong.

Great post-well done faux is stunning. I got a new iPhone today, but have been exchanging emails with ticklishfromadistance about typing on the keyboard with fingernails-HELP! Need shorter nails or bigger keys-not going to happen!

Averill - too true. Like ballet, there is no mediocre trompe l'oeil - it's either perfect or horrid.

Beth - I have the same problem! Takes some getting used to. You'll get faster.

Fabulous post. Such talent through the ages. And gorgeous sky picture!!