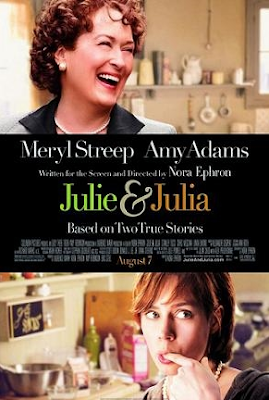 Julie and Julia, the movie. I can summarize the entire experience when I say:  I've seen it twice in the theater, in spite of the fact that I dislike cooking, and generally, any show about it.  The star is Meryl Streep as Julia, who deserves one of those tacky little gold statues in a real way.  Her character is wholly of the era and wholly Julia; there is absolutely no conception, watching her on the screen, that you are doing anything less than eavesdropping on Julia Child's life via a time-travel machine. And "Julia" is delightful to watch.  If Walt Whitman had lived in her day, "live deep and suck out the marrow of life" would have been dedicated to her.  She's optimistic without being a bore, naive without being a chump, and her voice... her voice should annoy the hell out of you, but that warbling trill is simply exciting.
Amy Adams acceptably pulls off her role as an ex-Texan trapped in Queens, trapped in a heart-breaking job, and trapped in the world's tiniest kitchen (my biggest question watching was:  how did they fit Adams, a stove, and cameras IN that space?). She's married to a non-annoying saint, Chris Messina, and decides to begin cooking and blogging her way through Mastering the Art of French Cooking because "at the end of a day where absolutely NOTHING is certain, you can know that eggs combined with flour will thicken." The movie seamlessly shifts between Julie's NY life and Julia's European one.  Both women are seeking purpose in their lives, and both find it on the holding end of a spatula.  Julia's metamorphosis is over years of questioning, chance encounters, and studious devotion to her craft and her book (over 8 years writing alone). Julie's story takes only a year - but it's enough. Both women get their book contract. And both women are, as Julie puts it "saved by food."
I give it two thumbs up - excellent acting, beautiful period sets (offset by gritty NY streets), and plenty of humor.  Just don't watch it hungry. 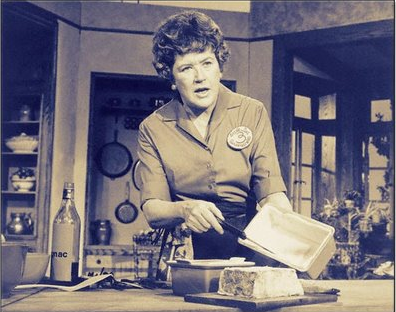 Email ThisBlogThis!Share to TwitterShare to FacebookShare to Pinterest
Labels: TV/Movies

Oh I LOVE IT too!! I want to go see it again. I was cooking dinner tonight thinking about the movie.

My mom, sister and I are going to go watch it together this weekend -- I'm so excited to see it!

STILL haven't seen it yet but am dying to go! I love Julia!

I am the only woman left on the planet that has not seen this movie. I love your review and your description of Julia. I seriously better get the op to see it like soon!

Cannot wait!!!! Kids back in school today and I am going to sneak to a matinee this week!

Terrific review! You have convinced me to see it!

I'm so excited to see this! I'm just in the middle of reading the book right now and loving it, her (Julie) personality is great!