We Are Very Sorry: Our Art is Currently Offline.

I'm fascinated by modern (as in current) art- fascinated, and not infrequently, horrified. It's difficult to make peace with an era of expression so enraptured with themes of destruction, decay, and depression (the "D" era of art, I suggest we call it). While thought provoking, it isn't always comfortable - but it IS nearly always serious. Which is why I find "art gone wrong" to be so wholly amusing. High-tech art is especially prone to these fits of lucidity, when technology fails and humor inadvertently pokes through. Here's a favorite, Jenny Holzer for the Smithsonian American Art Museum.  When I visited, I expected to see this:

A giant bug zapper!
But what I actually saw was this: 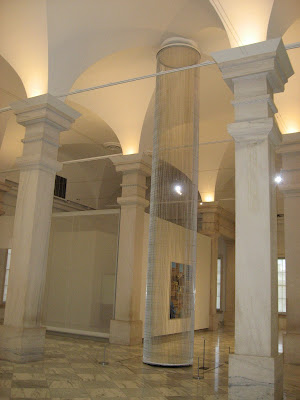 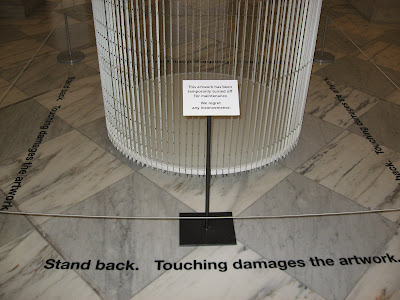 "The artwork has been temporarily turned off for maintenance. We regret any inconvenience"
But, not to pick on Jenny, I really enjoyed her light projection show at the opening of the 2007 Kennedy Season (the words from JFK's speeches were inscribed in light across the Potomac and Virginia shore). But, I do have to raise a question.  Art for art's sake is our motto today, although, historically, that's a rather new idea. It's taboo to ask:  is it really worth it?  But museums and curators have lately begun to ask that very question in ernest. For one, maintaining tech art is difficult (and astronomically costly) - what happens when it becomes necessary to have computer technicians and technology specialists on staff for just a few pieces? Especially since the technology and its components are nearly obsolete at the moment of acquisition. Attempting to replace a motherboard is hardly the same as repairing damaged canvas (the time may be the same; the ease of obtaining or creating materials is not).
Or, what happens if the memory fails? The file's corrupted?  NPR reporter Laura Sydell asks:  "how long will those backups last before they're obsolete? ...the downside is that the Web site must be constantly maintained. One advantage of contemporary artwork is that the artists are usually still alive." But what happens when the artist dies? Museums are finding out the hard way.

Hanson, "Lady With Shopping Bags"
Take, for instance, artist Duane Hanson's work in the Wallraf-Richartz Museum in Germany. When curators noticed his plastic sculpture of a woman entitled "Woman With Handbag" beginning to crack and crinkle, they simply asked Hanson to age her a bit, as if the decay were natural. Hanson passed away in 1996, however, and his artwork is now aging with decidedly less grace:  it's on limited display. Plastic, once thought to be the new "Grecian marble" is proving inherently unstable and unpreservable.
So what should museums do with expensive art pieces that they can't maintain and thus can't show? Even worse:  what if these decaying subjects damage the other art around them? Sam Kean writes an interesting article on this problem, and notes:  "Often the only clue a plastic is degrading is its odor. Some begin to smell like ammonia or take on a sickly new-car smell. PVC weeps chlorine, giving it a swimming-pool smell, and any plastics with acetate eventually give off whiffs of acetic acid, which is found in vinegar. Other plastics are redolent of burnt milk, burnt hair, celery, cinnamon, raspberry jam, or camphor "muscle rub." Worst of all, when plastics weep and bleed they can corrupt everything around them. Chemicals evaporate from their surface and acidify any moisture inside a display case. This causes mini bouts of acid rain that in turn eat away at the plastic in nearby objects—as well as any cloth, metal, or paper in those objects."
Smelly art? High-brow stuff isn't exactly supposed to be scratch 'n sniff. One possible solution is to simply give in. Don't bother expecting it to last. Biodegradable art or temporary installations may be the wave of the future. Unfortunately, when the next generation comes along, they won't have as much to be inspired by.
Temporary...
Video of the Leo Villareal's entrancing light instillation in the National Gallery of Art's East Wing tunnel. The instillation, consisting of LED lights and controlling technologies, is currently considered a temporary exhibit.
Or pre-destroyed? Odd. No other word. Except maybe, really?

Hmmm...I suppose temporary art gets preserved in some form through videos, photographs, etc. but I know that's not the same, and those also don't last forever. [Truth is, nothing does...but I'm sounding way too melancholy.]
...
That said, maybe temporary art befits our upgrade-next-week society.

Regards from Agneta in Sweden