It's time for another installment of Fun With Advertising. A while ago I did a little post on the absurdity of fashion ads, which often feature poses or surroundings unnatural - or just plain bizarre. But it must be different with home and interior ads. They're so straightforward:  furniture. Blinds. Vases. What could possibly go wrong? 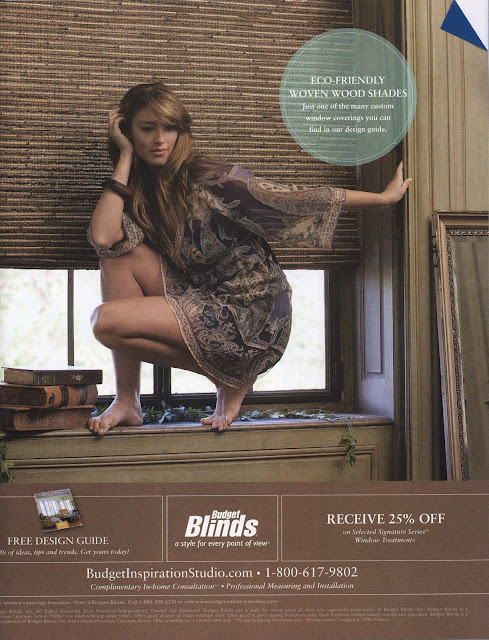 "Bob! BOB!!! Get the broom! Another one of those feral cat women got into the house again! I swear, I wish we'd never bought those %*#&!@ nature-friendly shades! Shoo you, SHOO!" 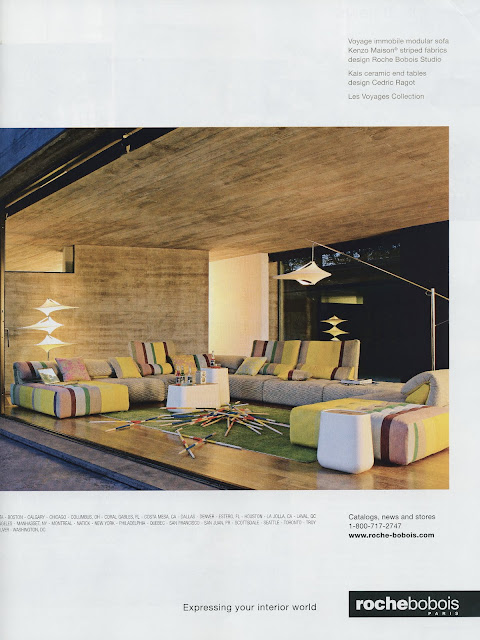 This is apparently a scene from a horror movie, after the crazy psycho breaks into the house, interrupting a leisurely game of living room croquet and causing the guests to all fling their mallets into a fire-wood-like pile in the middle of the floor and flee. 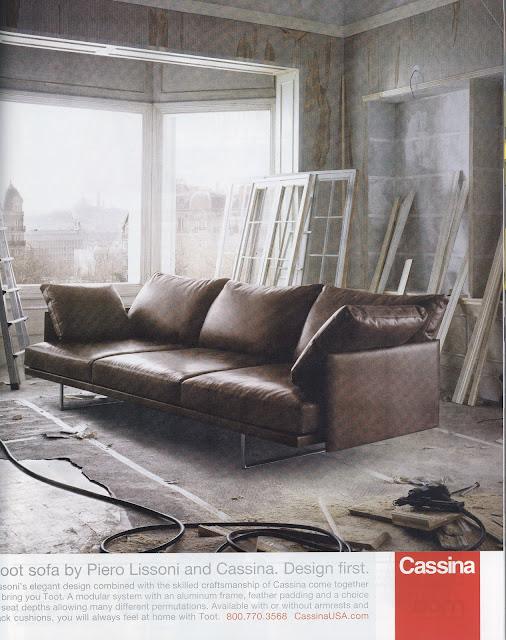 Because the first thing you should do after purchasing a sofa that costs as much as some third world country's GDP is to put its vulnerable buttery leather goodness in the middle of a reno project. Without windows. "Look out for the rainstorm!!!... oh, never mind." Also, the name of this couch product is "Toot." The ad print proudly proclaims: "you will always feel at home with Toot." Which made me laugh until I cried. 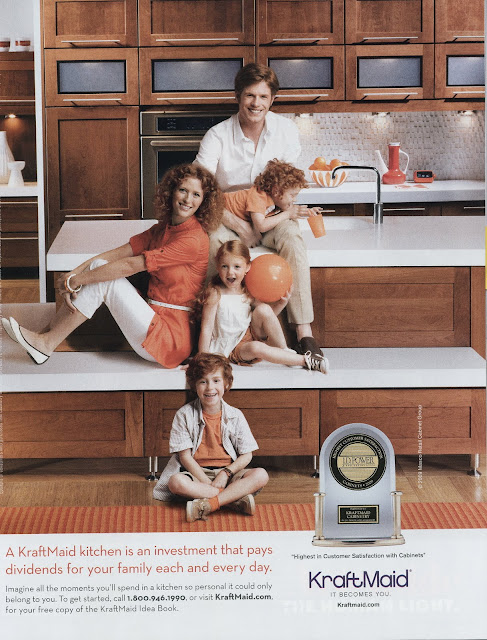 We'll overlook the fact that KraftMaid believes people who are genetically related must have identical hair color, and just skip on over to the subject of countertops. One of the weirdest ad trends is people lounging on their counters as if they were cushy Sertas, apparently because standing near them or cutting stuff up on them would seem so... normal. And I can't help but notice that some of these so-called counters are ridiculously low. The ad print says "imagine all the moments you'll spend in a kitchen so personal it could only belong to you." I'll take their word for it. Apparently red-heads can whip up some mean omelets with their knees. 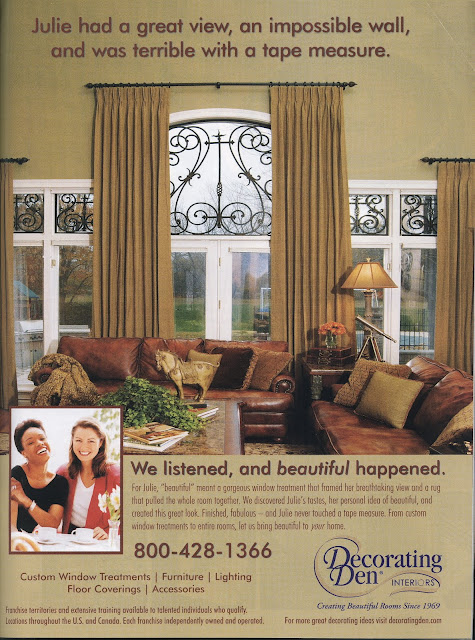 If by "beautiful" you mean "ugly brown explosion" then yes, it happened all over that room. 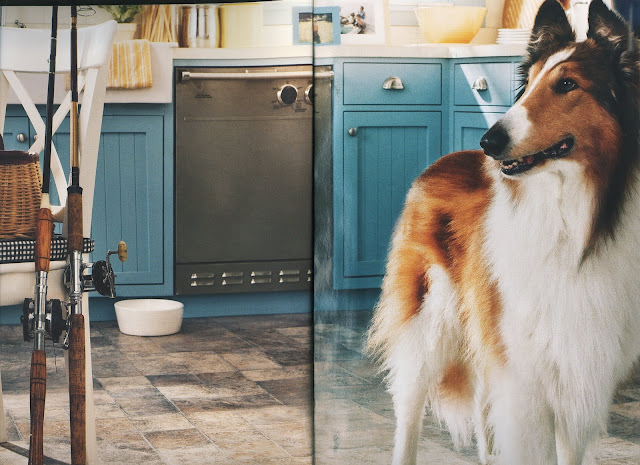 This Armstrong floor can handle anything. Even a collie that fishes. Lassie Like. 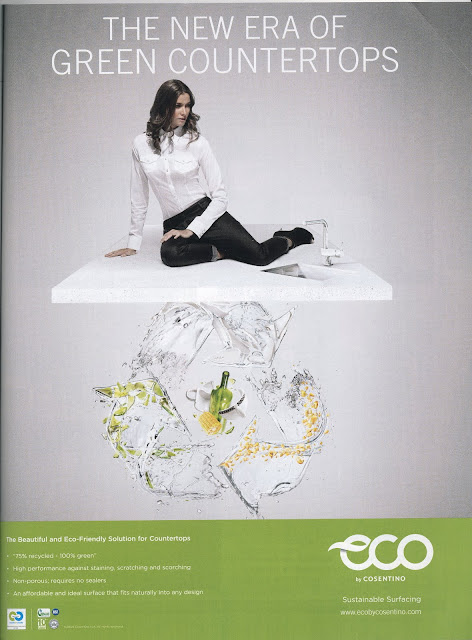 Again with the counter-lounging. When plumbing goes wrong, it blows your countertops off. Apparently. So the real message here is, "Hire A Good Plumber." You're welcome, Roto-Rooter.
All images, companies as attributed. Published in House Beautiful May 2010, Traditional Home March 2010, Elle Decor April 2010. Collie floor ad via Armstrong Floors.
Posted by Sanity Fair at 12:01 AM

I have to admit I'm so tired but I started laughing so hard at the red head family lounging on their countertops that I almost woke up my children. My husband came over and though he is rarely entertained by the same things I am on design blogs (or in general!) he laughed just as hard. Love it. I hope you use this feature to show off your witty writing more often! Hope you had a great week/weekend!

I like the window ad, but it's your commentary that's making me laugh.

Haha! Thanks for making my morning. :)

Picture 2: That's one heck of a set of pick-up sticks.

Monday morning and you actually
made me laugh .. . . quite the
accomplishment, madame!

(and you're SO right about those
helicopters wrecking havoc with the
beach towels .. . )

studioJudith said...
This comment has been removed by the author.
1:05 PM

Great post! I admit, I'm always drawn to Roche Bobois and their ads :)

Barefoot in the Park said...

you just made me laugh so hard i cried.

Oh gosh! You took me right back to the 60's and being a little kid! LOVE it all!! Thanks for the flashback:)
xo

Hilarious. Particularly love the model crouching in the window sill.

Whatever happened to just featuring gorgeous rooms? Is that not a big enough sell these days?

oh my goodness, hilarious. yes, a brown poop storm is what that hideous room looks like and the family is just kind of creepy.

this made me laugh so so hard! :D xo

What fun! I crouch in the window all the time. How about you?
Looking forward to seeing you at the IWCE next week.
Sarah

I saw you were going to be at IWCE and came by to tell you how sad I am to be missing it but then you go and make me laugh !

Oh my gosh - thank you for a hilarious start to my Tuesday. The ads are hilarious - your commentary is even better.