Thomas Jefferson's brick and mortar autobiography was Monticello:  43 rooms in the Roman neoclassical style. In a recent edition of the New York Times, artist and illustrator Maira Kalman created a picture story on Thomas Jefferson and his beloved Monticello, called The Pursuit of Happiness. Here are a few of her lovely illustrations, as well as some historical tidbits on design. Be sure to visit her blog for the entire story.

THE PARLOR:  Jefferson was ever the apt designer, and he frequently made up what he couldn't buy or find to his liking, such as the pattern on this parquet floor. He also created the automatic double doors visible on the left side of the room (when one door was opened or closed, the other followed in mirror fashion). If you're excessively curious, and enjoy watching tourists awed by a door shutting, click here for the video. Jefferson played violin very well, and liked to perform in this room with his little grandchildren dancing around him. 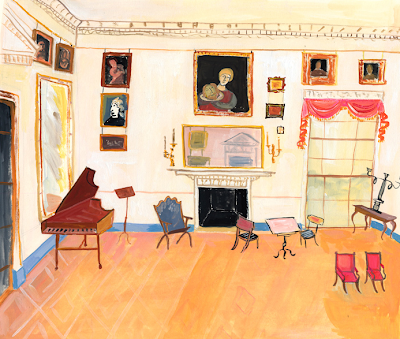 JEFFERSON'S BEDROOM:  TJ invented the triple sash window, thus becoming the hero of generations of height-averse housekeepers. He also invented several of the items visible in Kalman's illustration - including the multi-book reading stand (left side), for your on-the-go senior statesman who doesn't have time to use bookmarks. His bed is in an open alcove, with a little ladder on one side for accessing handy storage up above. The practical Mr. Jefferson was able to function entirely out of one space, with equal ease in working or sleeping. 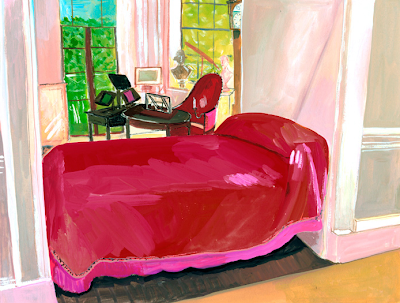 THE FOYER, as rendered by Kalman. This is not, as it looks to modern eyes, a trophy hall (although it was that too). This was a museum of the Americas. The instigator of the Lewis and Clark expedition and author of Notes on the State of Virginia had many prominent foreign guests to his home, and his personal museum proved to many doubtful European eyes that variety and profit abounded in the New World. Keep in mind there was then no Smithsonian, no Guide to American Wildlife, and that the hapless discoverer of the Platypus was labeled a fraud. 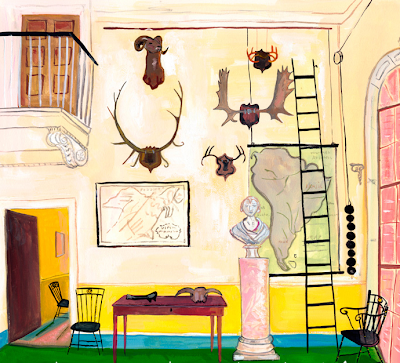 A room Thomas Jefferson designed. Do we have any cause to doubt the aesthetic talent of our founding fathers? Today's average politician constructs pork barrels, not buildings. 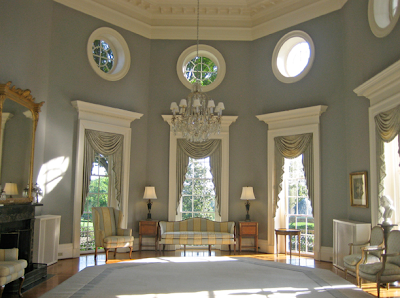 Images: Monticello, monticello.org. Maira Kalman images via the nytimes.com.
Posted by Sanity Fair at 12:01 AM

Monticello is a must visit & nearby Chrlottesville is super quaint. My favorite momemnt on the tour was how Jefferson described his presidency..splendid misery. How great of a description is that??

Sing it sister!! You're so right and it's just so wrong.

The home has such great scale. Love the moldings and the pier mirror.

Great Illustrations. Usually renderings of historical homes are very staid. These have life in them. Lovely.

Love everything and anything she does.

i'm definitely going to check out her blog; these illustrations instantly have my heart.