Leopard is THE animal-themed print of the year (not that it wasn't last year too).
But what could be more dashing (and animal-friendly) than a LIVE leopard as a fashion accessory? Didn't you know? Teensy dogs are SO last season. Teensy-dog-eating beasts of prey are NOW.
THEN: Sorry, Elle. 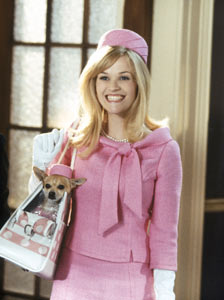 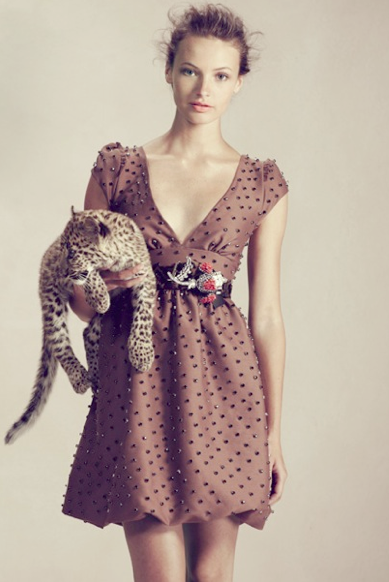 It's certainly been done before... in the Golden Age of Hollywood, to be exact. The movie Bringing Up Baby is Katherine Hepburn's "lady of the mad manor" moment - remember her in The Philadelphia Story, swanning around the manse in a hilarious send-up of poor reporter Jimmy Stewart's impression of what the high life is like? In Bringing Up Baby, Hepburn's giddy, touchingly demented socialite takes center stage; escorted by a leopard named "Baby" she drives everyone to distraction (including, of course, the dashing Cary Grant). All ends well for everyone - including Baby - who is rewarded with steaks for not eating any of the local peasantry. 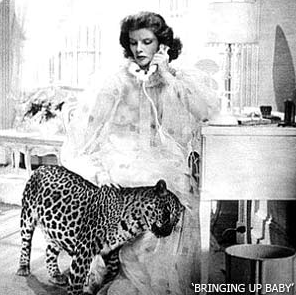 Just out for our afternoon constitutional... 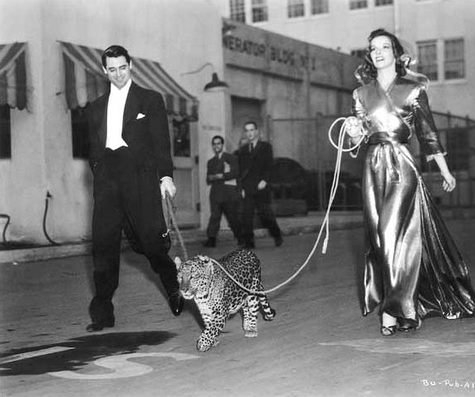 Cartier's holiday ads this season equate little tiggers with big expense (but where is the jeweled collar, Cartier?). WARNING:  baby leopards will eat your accessories. Do not try this at home. 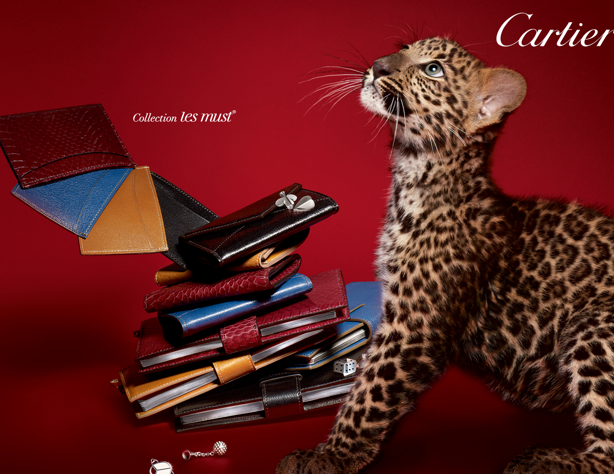 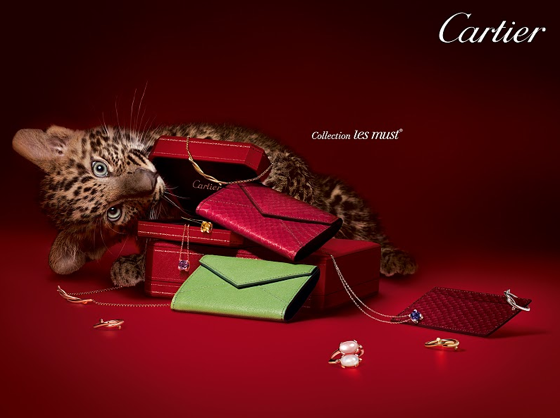 J.Crew - of course - is right on trend, featuring this DARLING five month old baby leopard in their current campaign. If I had Hepburn's dressing gowns and a spare freezer full of steaks, this would be my new pet. Also, I'd probably need a lot of band-aids. 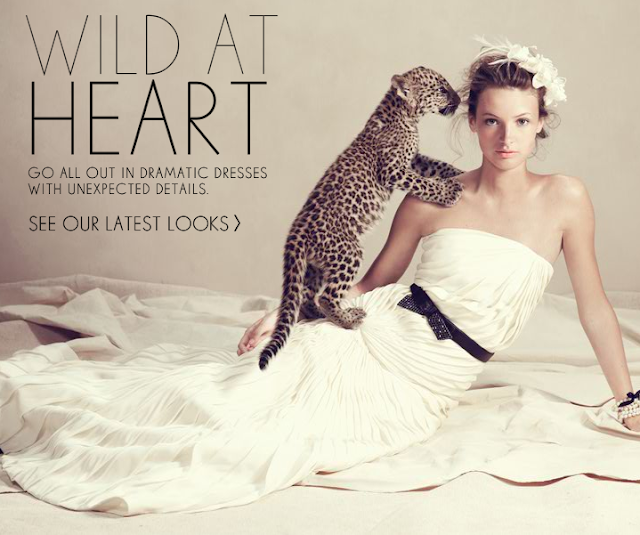 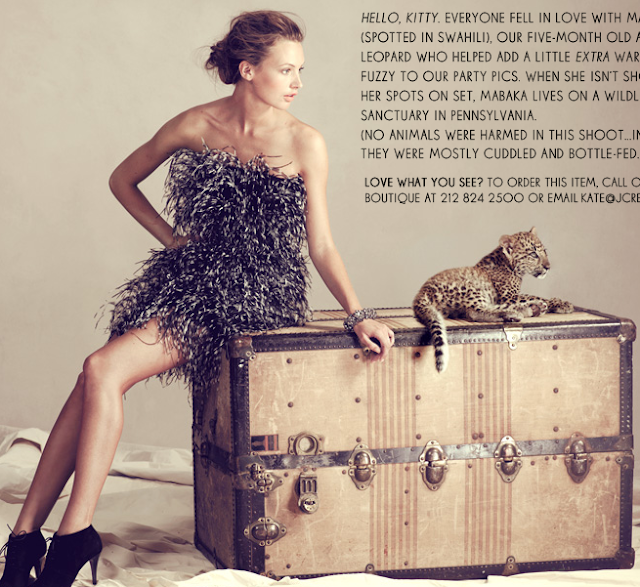 If you are so terribly tame that this fashion season will not include you turning your abode into a Kenyan game preserve, the retailers of America are here to help. Pick from jewellery, accessories, and dresses - but remember, a little spot goes a long way! 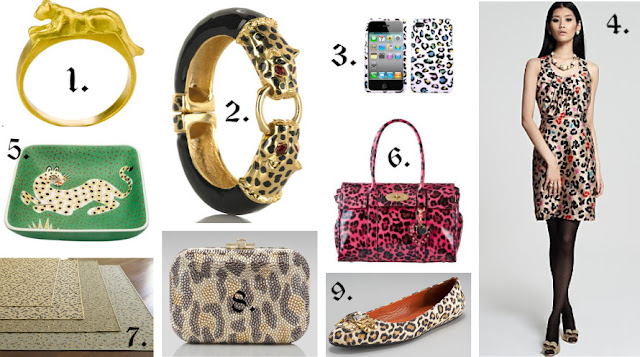 
P.S. Know the difference between a leopard, an ocelot, and a cheetah? Neither do I. If I've confused any of these creatures in this post, my apologies to the Animal Kingdom. And, FYI, I don't taste very good.   /Images/ June Pickney/ Elle Woods/ J.Crew/ Cartier/ Hepburn and Baby/ Hepburn and Peck/ *Jewellery is a sponsored link.
Posted by Sanity Fair at 2:59 PM

I lovw leopard print, and the Cartier ads are the most adorable that I have EVER seen. Thank you for shaing these precious images.
Teresa

Such a FUN post, love old movies, and especially any with Cary Grant! Love the Daphne Simon ring...wonderfully different! Janell

At the risk of sounding heartless, I prefer my leopard in the form of shoes or a handbag...or maybe a belt.

That said, they make adorable props for fashion shoots!

I am so glad I didn't get rid of that leopard coat from a few years back, I am so wearing it now. And I am keeping my new toy puppy though it is a beautiful cat. XO

I think I need to drive to Pennsylvania to see that little leopard in person.

I'm a fan of leopard print, especially shoes.. they takes an outfit from drab to fab.

How did I not know of your fun blog? I just stumbled upon it and am now following! I love the flats and that clutch. Love the comment about accessories being eaten... hee hee. I have a dog that eats shoes if left laying around. Have a great weekend. xo

While I love the idea of having a baby leopard running around, I think I will have to stick to my leopard flats!

Fun - I love a little leopard in my life. Bringing Up Baby is one of my favorite movies and I also love all your other spotted selections. I feature a lovely little leopard item tomorrow as well I think you might like :-)

Leopard is one of my fave prints...just wore one of my leopard sweaters yesterday and a co-worker told me I looked like I was ready to go 'hunting' - which in NH literally means hunting for moose or deer! such an iconic print that will NEVER be out of style...

what a great angle on a familiar trend.

Love that first photo. How on earth did you find it?

I just stumbled on your blog, and am so in love! You have so many inspiring photos, and I just adore this post on leopards (especially the one with Cary Grant and Katherine Hepburn in 'Bringing Up Baby'). Well, I'll definitely be back to visit again soon! :) Paris in Pink